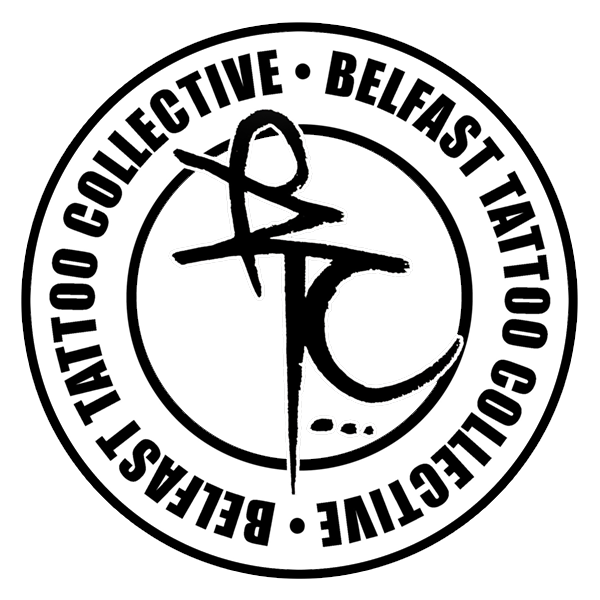 George was born in Staten Island, New York in 1974 but spent most of my childhood in Sarasota, Florida. Growing up George was always interested in art and drawing, spending a lot of time in the art room at school even over the summer break. George was lucky enough that the art teacher would let him into the art class while she was working and he never had it in his head that he would become a tattoo artist as his parents weren’t tattooed. The only contact he had with tattoos at the time was his Grandfather who was heavily tattooed as he served in the army during WW2.

At the age of 13 his family moved to Belfast, Northen Ireland. At the same time his uncle and his family moved back to Belfast from the United States where he served time in the army. While he was in the army he learned to tattoo and when he returned to Belfast he started one of only a couple of studios (Belfast City Skinworks) in Belfast in 1987. This is when he was introduced to the world of tattooing properly. He would help out at the studio sometimes with stencils and helping customers with choosing designs, etc. He also studied graphic design at college receiving a HND in Graphic Communications in 1998. From there he had odd jobs but hadn’t started tattooing.

George officially started his apprenticeship in March of 2000 lasting roughly 2 years. He spent most of his career at Belfast City Skinworks, leaving to open his own studio Trident Tattoos in 2012. But he had to close the doors of my studio in 2015. He has worked at a couple different studios over 2015-16 but is now a resident artist at Belfast Tattoo Collective full time. He has also worked at several conventions over the years such as the Northen Ireland Tattoo Convention, Dublin Tattoo Convention, Leeds Tattoo Show, Manchester Tea Party, East Coast Expo and a few others along the way.

I enjoy tattooing illustrative designs and black and grey style work. To see more of my work check out the galleries. Please feel free to contact me with any ideas or projects you might like to make into a tattoo. Thanks and good luck,